So yesterday was unusual. On the calendar it happened to be when we were visiting Josh, but unlike a normal trip out, apart from buying his supplies (lottery ticket, radio times, bottles mineral water, few sweets & crisps) and a search round the charity shops for DVD, or play-station game. Dinner at a drive through MacDonald’s. All these things were still part of ‘his day’, ‘his routine’- but what made it special was we were going to the Theatre.

Not only going to the theatre, but Theatr Clwyd in Mold, to see ‘Josh’ in BoHo  a co-production between students with learning disabilities at  Hijinx North Wales & Theatr Clwyd. Directed and composed by Hannah Noone, who working with Hijinx over a series of workshops & through these sessions our sons & daughters who attend the group help devise the piece.

Lucy Green and Kenny Harma members of the cast from Hijinx  live on stage were fantastic! So if we have to differentiate members from Hijinx as ‘disabled actors’- then  Daniel Lloyd the third member  of the cast, but lead role is ‘non disabled’- he plays   ‘David Jones  just another cog in the City’s giant wheel, until one untimely mistake forces him out…to BoHo. On this journey of self-discovery, amid an otherworldly collection of misfits and freethinkers, rules are challenged, individuality is celebrated and ‘reality’ is tested’.   Dan was marvelous- his energy amazing, from dancing round the stage, playing air guitar  to his fake operation. Great entertainment.     https://www.theatrclwyd.com/en/whats-on/boho/

I can’t describe the performance accurately- it’s excitement from start to finish. You walk into a dark auditorium, dry ice milling around. The stage set purely made from white squares – where film can be projected. It felt futuristic, a bit like being part of a dream or a nightmare, fast paced, a mixture of songs, music, & when Josh’s part came onto the screen as ‘Bob Shoeman’ it was so enjoyable to watch. A proud moment as a mum to see your autistic son express himself so confidently in his role. It wasn’t a large part of the show, but an important section -hard to describe- but something akin to the Wizard in the Wizard of Oz. But with humor & confusion. I loved it when he  lost his patience and said ‘get out of my shop’.

What a great experience- the other parents must feel equal pride, & contentment that their offspring have found something they truly enjoy.

Judith & Sandra, some of my oldest friends came along to support Josh by watching the show. He was thrilled – giving them both hugs & it was so lovely to see how he was excited by wanting us to see the show. After it finished we sat having cups of tea, and met by all member of the cast; Lucy & Kenny from Hijinx (briefly), chatted with Hannah (Producer) & Danny (Lead role)- it was super to hear stories from behind the scenes.

What a good day-a tiring day, but very unusual. Thank you Hijinx, Theatr Clwyd, to everyone involved. Giving Josh a chance for ‘his moment of fame’…….(so far). 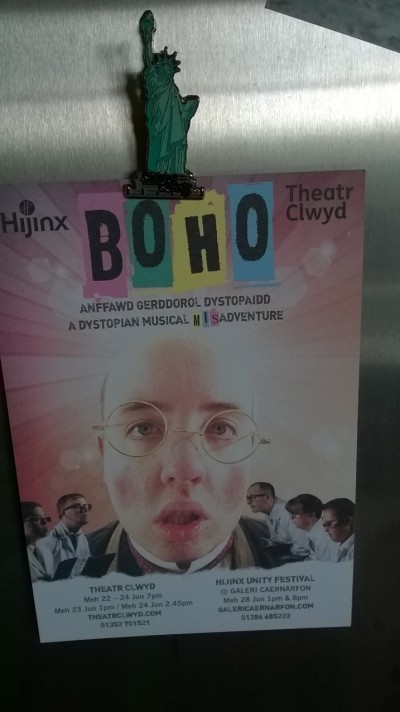 Living life with a chronic illness is definitely not easy. But I do my best to push through all the barriers this illness puts in front of me! In my heart and mind, I believe maintaining a positive outlook on all situations in life will carry us through to much better times! I hope you find the information that I provide both helpful and inspirational!

Walk a Myelin* My Shoes

Art doesn't have to be worthy

to be worth sharing

Damn, Girl. Get Your Shit Together.

Unsolicited advice for shit you didn't know you were doing wrong

Stumbling Through Life with MS

A Breath of Fresh Air

My Life: Teaching, Acting and Living with MS

Fox on an Island

A journey into Cade's world

On becoming normal when life with MS is a beautiful mess

Written from the heart, this is the unadulterated truth of life with multiple chronic illnesses and being housebound. My life open for you to follow. Please join me

Welcome to my Kool Kosher Kitchen where food is fun and fun is to create food!